The Tinsley 5916 Electroding Detector is the ideal equipment for use on board ship when the electroding method is being employed for the detection of submarine cables buried or laid on the sea bed. This light weight and portable instrument can be mains powered or can operate for several hours from its own internal, rechargeable battery pack. Ideally suited for use with the Tinsley Electroding Generators, the 5916 will also operate with any generator operating in the frequency range 4 to 40Hz. 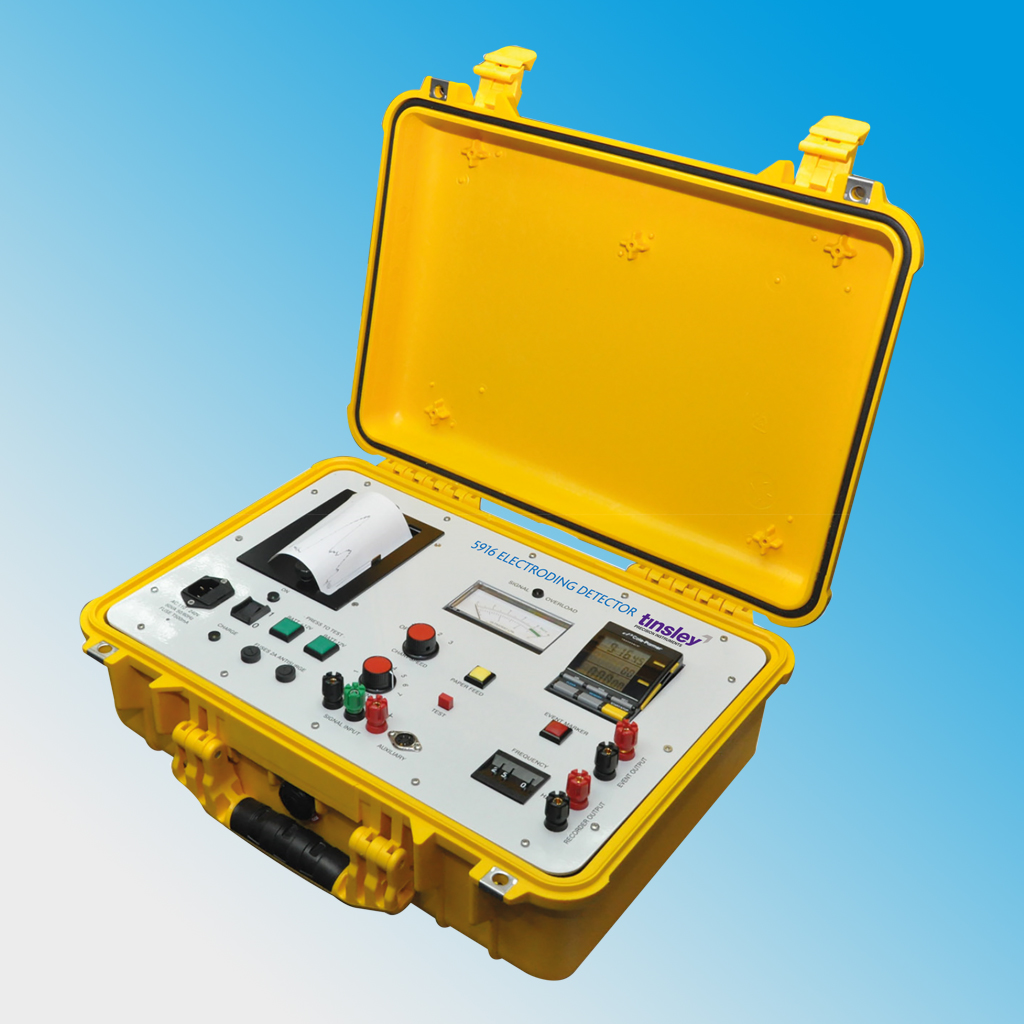 The Electroding Detector is a high gain low frequency selective Amplifier to detect the electric field from a submarine cable powered by the Tinsley 5915 electroding generator or similar.

The detector amplifies, filters, indicates and records signals of the selected frequency in the range 4Hz to 40Hz. At the highest gain setting a 1µV RMS input signal of the correct frequency will give a full scale reading on the analogue front panel meter and the optional chart recorder.

The detector is completely self-contained in a splash proof IP65 portable case. Rechargeable batteries are included in the case and also a mains power supply which will recharge them. External batteries may also be used. A clock/timer is incorporated on the front panel to help synchronise detected events.

To use the detector the signal input terminals are connected to the customers receiving probes, the exact operating frequency is selected on the thumbwheel switches and the gain switch is adjusted to obtain a useful indication of the signal.

The Detector is used to locate submarine cables in water of up to 180 metres (100 fathoms) in depth. A signal in the range of 4 Hz to 40 Hz is transmitted down the submarine cable by an Electroding Generator such as the Tinsley type 5915 unit. This signal is picked up by a set of trailed probes connected to the detector. The Detector and receiving probes are normally aboard the repair ship, however, as they are portable, the detector may be operated from any locally available ship or launch. The received signal is processed and passed to the analogue front panel meter and if fitted, chart recorder.

Normally, the Electroding Generator, Tinsley type 5915, is located in the submarine cable terminal nearest to the fault area. The Electroding Detector, Tinsley type 5916 is aboard the ship. When the ship is in the vicinity of the cable area, the 5915 Electroding Generator is powered thus applying the low frequency signal to the cable under test. At these frequencies, the field of the signal extends into the water surrounding the cable for a considerable distance. The ship would normally steer a course to cross the cable on the landward side of the expected fault position. Before this position is reached, the ship launches the receiving probe(s) which will then connect to the detector.

The Detector is set (by thumbwheel switch) to the frequency being transmitted by the Electroding Generator on shore. As the ship crosses the cable, the field of the signal current on the cable induces a voltage into the probe(s). This signal is then processed by the Electroding Detector and a deflection on the meter is registered. This may be recorded by the optional built-in chart recorder.

For identification purposes, the Electroding Generator may be keyed on and off periodically.

Once the cable signal has been identified and confirmed, the ship then follows the cable on a zigzag course until the signal disappears. When this happens, the fault or break has been located. Use of NAVSAT on a marker buoy would mark the point where the signal was last detected. Further probe runs may be made for a more precise fix of the fault position.

See the table below for a run-down of this product's specifications.